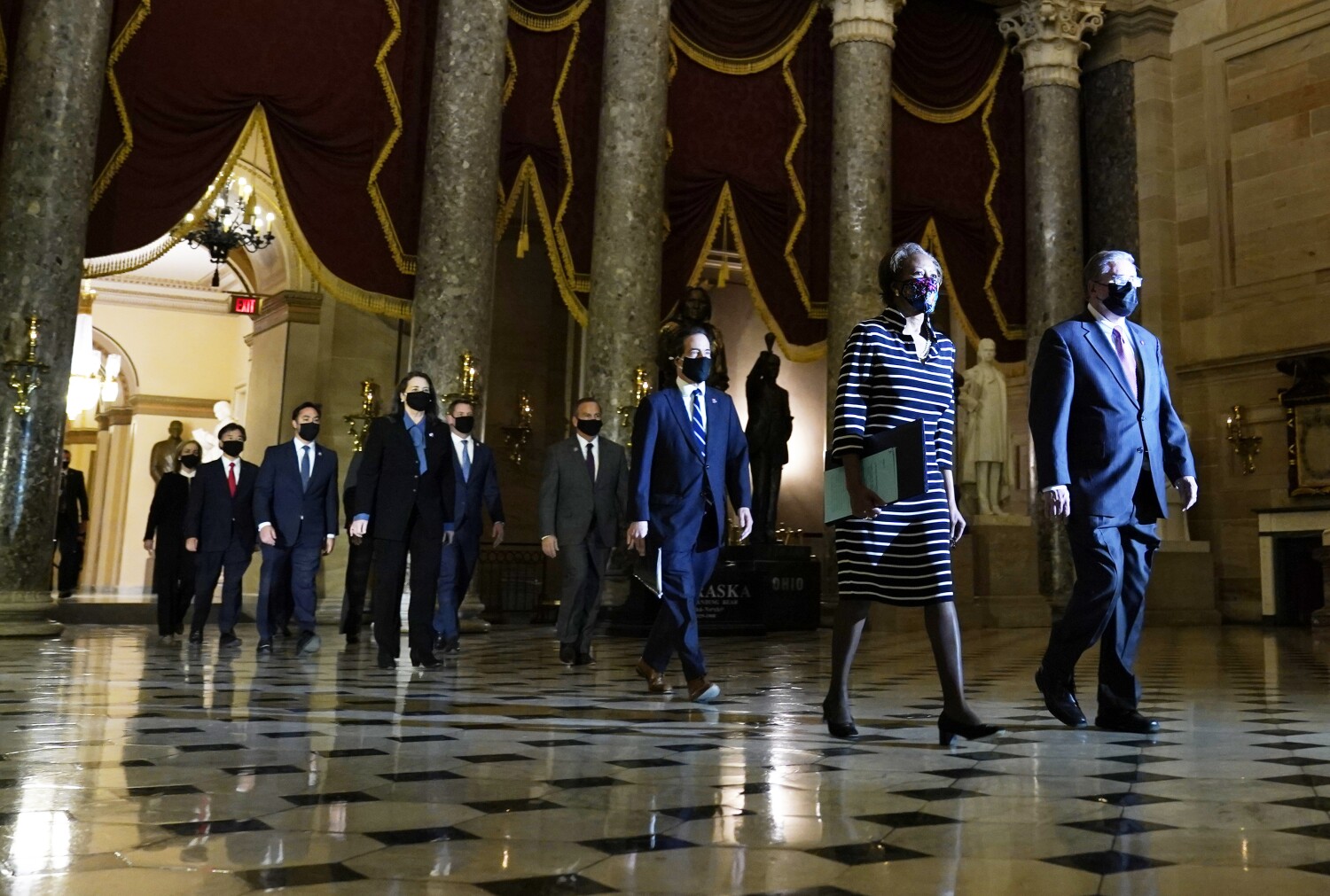 After a widely panned opening-day performance by the legal team of former President Trump, the Senate voted Tuesday that the Constitution allows for his impeachment trial to proceed for actions he committed while in office.

The 56-44 vote clears the path for up to four days of arguments on whether Trump should be convicted of inciting the insurrection at the U.S. Capitol. House impeachment managers begin their case Wednesday.

The first day of the nation’s fourth presidential impeachment trial was dominated by the question of whether the proceeding was constitutional, since Trump is no longer in office.

House Democrats argued that the Constitution gives the Senate authority to hold the trial of a former president because he is being tried for crimes allegedly committed while in office and because the House impeached him during his term. Trump’s lawyers, Bruce L. Castor Jr. and David Schoen, argued that a trial can be held only when an official is still in office.

Trump was impeached last month on a charge of inciting the insurrection Jan. 6, when a violent mob of his supporters ransacked the Capitol. The riot left five people dead, including a police officer.

Trump, who left office Jan. 20, is the first former president to face an impeachment trial in the Senate. He is also the only president to be impeached twice, following his 2019 impeachment for allegedly encouraging Ukrainian government officials to interfere in the 2020 election by investigating his presidential rival, Joe Biden. Trump was acquitted of those charges last year by the Senate.

The result of the vote Tuesday evening was expected. In a preliminary procedural vote Jan. 26, five Republicans crossed party lines to join Democrats to suggest that the trial is constitutional: Sens. Susan Collins of Maine, Lisa Murkowski of Alaska, Mitt Romney of Utah, Ben Sasse of Nebraska and Patrick J. Toomey of Pennsylvania.

On Tuesday, those senators and one additional Republican, Sen. Bill Cassidy of Louisiana, voted that the
trial was constitutional, a small win for Democrats.

Even so, since conviction requires the support of 67 senators, Trump’s chances of a second acquittal are strong in the evenly split chamber: 50 Republicans versus 48 Democrats and two independents who caucus with them.

Republicans were critical of the presentations by Trump’s attorneys.

Castor, a former Pennsylvania district attorney, opened with a long speech that did not mention the issue facing the Senate: whether the Constitution allows impeachment proceedings against a former president. His colleague, Schoen, a defense lawyer based in Atlanta, grappled with the constitutional issue, but only toward the end of another long set of remarks that focused on accusing Democrats of waging a political vendetta against Trump.

“The president’s lawyer just rambled on and on,” said Sen. John Cornyn (R-Texas). “I’ve seen a lot of lawyers and a lot of arguments, and that was not one of the finest I’ve seen.”

Murkowski, one of the Republicans who joined Democrats in the vote, said she was “really stunned” by Castor’s opening. “I couldn’t figure out where he was going … but I don’t think he helped with us better understanding where he was coming from on the constitutionality of this,” she said.

Cassidy said the poor performance of Trump’s lawyers led him to change his position.

“The House managers were focused. They were organized. They relied upon both precedent, the Constitution and legal scholars. They made a compelling reason,” Cassidy said. “President Trump’s team were disorganized. They did everything they could but to talk about the question at hand.”

Watching the proceeding Tuesday, Trump was “livid” when Castor complimented House impeachment managers, according to a person familiar with the former president’s thinking. It was a “bad mood” that “got worse” as his attorneys made their case, the person said, adding that Trump seemed confused as to why his team was so unprepared. Trump’s team had little time to prepare: The attorneys came onto the case less than two weeks ago, after he parted ways with his previous lawyers.

Castor told reporters he was not “making anything” of the criticism from Republicans or of losing Cassidy’s vote. “If [GOP support] leaks down to 34, then I’ll start to worry,” he said.

Beginning Wednesday, both sides will be given two days to lay out their arguments. House Democratic aides said Tuesday they would introduce previously unseen evidence in the case.

Within moments of the start of the trial Tuesday, Democrats played a graphic 13-minute video depicting the events of Jan. 6, showing Trump’s comments chronologically alongside the actions of the mob. As the video played, the sounds of the mob screaming echoed throughout the Senate chamber. Some members sat alert, paying rapt attention. Some turned away at points.

Rep. Jamie Raskin (D-Md.), the lead impeachment manager, broke the silence: “If that is not an impeachable offense, then there is no such thing.”

Sen. Roy Blunt (R-Mo.) later said it was perhaps the longest time he had sat and watched footage of that day. While House members were in the chamber as rioters tried to break down the door, senators had been evacuated shortly before — some have estimated only a single minute before — rioters breached their section of the Capitol.

“Even though we are theoretically witnesses, we were pretty secured witnesses,” Blunt said, calling the events of the day “clearly tragic.”

Given Democrats’ reluctance to let President Biden’s agenda get bogged down by a lengthy proceeding and the near certainty that Trump won’t be convicted, the trial may be one of the shortest presidential impeachments in history.

Oral presentations on the single charge will be followed by senators’ questions and the opportunity to call witnesses, a request the House managers may not take up.

A final vote on conviction could take place as soon as this weekend. The Senate plans to work each day, including weekends, until the trial is completed.

Trump’s lawyers Tuesday argued that the trial is merely “political theater” and that if the Senate can try Trump now that he is out of office, there is nothing to stop them from pursuing any other former government official accused of wrongdoing who is now a private citizen.

“The framers could have explicitly included a provision allowing for the impeachment of a former president, but they did not,” they wrote in a brief.

Democrats — and many legal experts — argue the opposite. A group of 150 constitutional law experts wrote recently that the Constitution does allow former officials to be tried. As evidence, they point to the Constitution’s allowance that the Senate can bar impeached and convicted officials from further office.

“Disqualification is a consequence that might need to be imposed on prior officeholders as well as current ones,” they wrote. In keeping with that rationale, nothing in the text of the Constitution bars Congress from impeaching, convicting and disqualifying former officials from holding future office.

Raskin warned that by acquitting Trump, the Senate would be introducing a “January exception” in which the president is not accountable for his or her
behavior in the final days
in office, at the point in which a lame-duck president’s power has cratered, and democracy is at its most vulnerable.

There is no question that the House was allowed to impeach Trump because he was president when it did
so. The question Republicans raised is whether a trial can be held after his term has ended. Many experts say it can.

“The Senate has authority to try all impeachments,” Michael W. McConnell, a professor at Stanford Law School and a former federal judge appointed by President George W. Bush, said in an interview.

“The framers intended the impeachment power to reach both current and former officials who engaged in gross abuse of their office,” House managers wrote in a recent brief. “The text and structure of the Constitution that emerged from their debates reflect — in fact, require — that conclusion.”

Stanford’s McConnell disagreed, saying “only current officeholders” can be impeached.

Other constitutional experts worry that trying Trump may set a dangerous precedent, one that would allow the House to impeach officials long after they have left office. To emphasize that point, some Senate Republicans have raised the prospect that a Republican-controlled House might one day use such a precedent to impeach a former Democratic president, such as President Obama.

“If the Senate were controlled by Republicans, they could decide that this is a broad precedent,” said Rory Little, a constitutional law professor at UC Hastings College of the Law.

The Senate has held this vote before, when it determined at the start of the 1876 impeachment trial of War Secretary William Belknap that it retained jurisdiction to impeach former government officials, and held a trial. Belknap was acquitted.

Weetabix and beans? How one ghastly breakfast combination broke the internet

HuffPost is now a part of Verizon Media

HuffPost is part of Verizon Media. We and our partners will store and/or access information on your device…

She added, “It is way too much control for one branch to have over another branch, particularly where…

WASHINGTON (AP) — Donald Trump took in the win at Mar-a-Lago, surrounded by friends and family. His lawyers…

Loyalty to Trump remains the fault line for Republicans

Justice Dept. Is Said to Be Examining Stone’s Possible Ties to Capitol Rioters

WASHINGTON — The Justice Department is examining communications between right-wing extremists who breached the Capitol and Roger J.…

On Saturday morning, the Senate echoed with what had become, by Day 5 of former President Donald J.…

A man breaks a window as a mob of supporters of U.S. President Donald Trump storm the U.S.…

2 at Capitol riot who claim they’re journalists are indicted