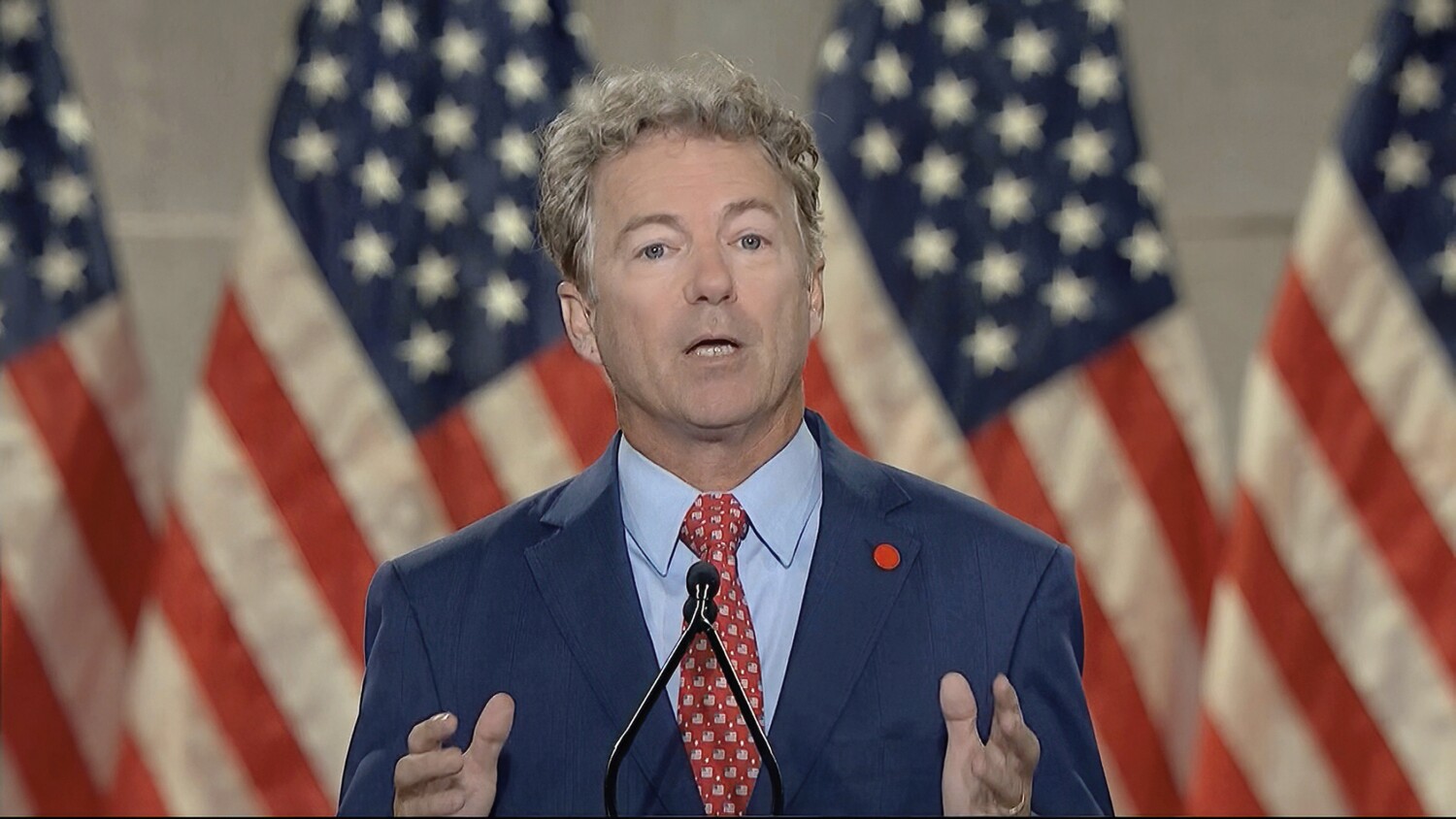 Moments after senators were sworn in Tuesday as jurors in former President Trump’s impeachment trial, Republicans forced a vote on the constitutionality of the process that strongly suggested Democrats won’t be able to get the two-thirds support they will need for a conviction next month.

Forty-five Republicans supported a resolution by Sen. Rand Paul (R-Ky.) that said the trial is unconstitutional because Trump is a private citizen and no longer president. Democrats had the votes to table Paul’s motion, with support from five Republicans.

But the level of GOP support for Paul’s effort underscored how difficult it will be to get 17 Republicans to join Democrats in voting to convict Trump.

“Forty-five votes means the impeachment trial is dead on arrival,” Paul said after the vote. “We’re excited about it. It’s one of the few times in Washington where a loss is actually a victory.”

Senate Majority Leader Charles E. Schumer (D-N.Y.) said the theory that the Constitution prohibits a trial of a former official is “flat-out wrong by every frame of analysis.”

He pointed out that the Constitution allows the Senate to not only remove an impeached official from office, but also bar him or her from holding future office.

“If the framers intended impeachment to merely be a vehicle to remove sitting officials from their office, they would not have included that additional provision,” Schumer said on the Senate floor.

Republicans who joined Democrats against the Paul measure were Sens. Mitt Romney of Utah, Lisa Murkowski of Alaska, Susan Collins of Maine, Ben Sasse of Nebraska and Patrick J. Toomey of Pennsylvania.

Though many more GOP lawmakers have condemned Trump’s actions in inciting the Jan. 6 attack on the U.S. Capitol, the party has largely coalesced around the idea that an impeachment trial of a former president is unconstitutional.

Republicans say the fact that Chief Justice John G. Roberts Jr. is not presiding at the trial is proof that it is not valid. The Constitution says that the chief justice must preside at trials of a president. Roberts has reportedly signaled he does not want to be involved, and Senate President Pro Tempore Patrick J. Leahy (D-Vt.) will preside over Trump’s trial instead. Leahy, who has previously called on Trump to resign, will still get to vote.

Paul’s motion — while procedural — forced Republicans into a difficult position. While several Republicans agree that a trial is not valid, a few have left the door open to conviction.

Senate Minority Leader Mitch McConnell (R-Ky.), for instance, told his fellow Republicans in a memo two weeks ago — while Trump was still in office — that he would listen to the legal arguments in the case, raising the possibility that he might vote to convict. But Tuesday, he supported Paul’s motion.

Some Republicans privately interpreted McConnell’s comments earlier this month as a means of keeping the threat of conviction on the table while Trump was still in office. Now that the president is gone, Republican leadership may not be eager to divide members of their party with an impeachment trial.

Democrats cautioned against reading the vote on the Paul resolution as a precursor for the vote on Trump’s conviction, as did Republicans such as Toomey, who voted with Democrats, and Sen. Rob Portman (R-Ohio), who supported Paul. “I’ve not made my mind up,” Portman said. “I’m a juror.”

But others are more skeptical. Sen. Richard M. Burr (R-N.C.) said the odds that Trump is convicted are “probably as close to zero as you can get.”

Murkowski said the 45 senators who supported Paul in Tuesday’s vote may find themselves boxed in and would have a hard time voting for a conviction, even if they believed it was appropriate.

The Senate was somewhat caught off guard by having to vote Tuesday on a trial’s constitutionality.

Murkowski said she didn’t even know about the vote until Tuesday morning. “It was a little unfortunate that we had this spontaneous vote on an extraordinarily significant matter,” she said. “People had to make really quick decisions.”

Unlike Trump’s first impeachment trial, when many Republicans said he did nothing wrong, GOP lawmakers this time are not defending Trump’s efforts to overturn the electoral college vote, his encouragement of protesters or his slow action to stop the attack that left five dead.

Instead Republicans are focusing on the precedent of holding an impeachment trial for a former president.

“I still have concerns about the constitutionality of this, and then the precedent it sets in trying to convict a private citizen,” Sen. Joni Ernst (R-Iowa) said. “So in the future can this be used against President Obama?”

Senators were sworn in Tuesday, and a summons was to be issued for Trump. But the trial will essentially be paused for two weeks to allow both sides time to prepare. Oral presentations will begin no sooner than Feb. 9.

Russian President Vladimir Putin chairs a meeting with members of the government in Moscow, Russia, on February 5,…

As Biden and Republicans meet, Democrats prepare to move on COVID relief alone

As President Biden met with 10 Republican senators Monday to test the waters of bipartisanship on coronavirus relief,…

WASHINGTON — Houthi rebels in Yemen will be stripped of a U.S. terrorist designation next week, the State…

Georgia prosecutors have opened a criminal investigation into Trump’s call to a state official asking him to ‘find’ votes.

Less than a week after announcing new deals for additional doses of approved coronavirus vaccines, the federal government…

The Trump impeachment trial: What Shakespeare would have seen

Samuel Johnson once observed that “when a man knows he is to be hanged in a fortnight, it…

Republicans acquitted Trump again, but this time is different

Impeachment Briefing: Wrapping with a Warning

This is the Impeachment Briefing, The Times’s newsletter about the impeachment investigation. Sign up here to get it…