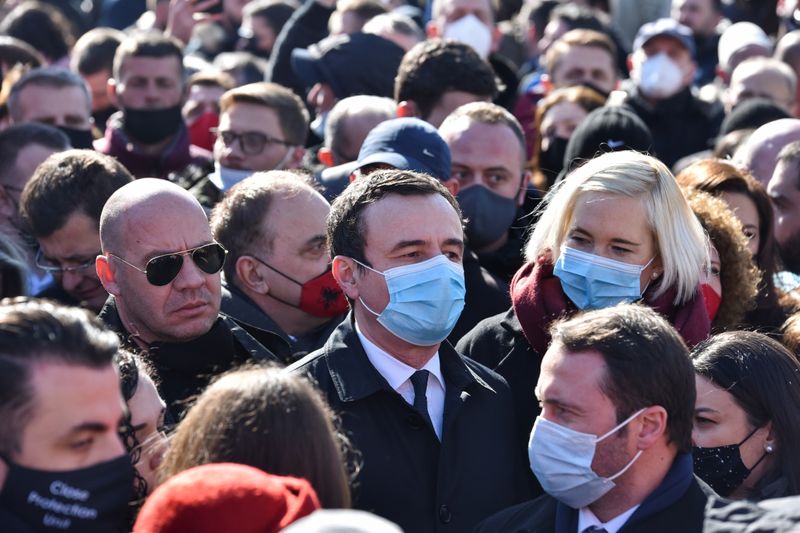 © Reuters. Albin Kurti, leader of Vetevendosje party looks on during a final campaign rally in Pristina

PRISTINA (Reuters) – Kosovo goes to the polls on Sunday in a parliamentary election that an anti-establishment party is expected to win by a landslide, further complicating Western efforts to resolve a decades-long territorial dispute with Serbia.

Opinion polls predict the Vetevendosje party will win between 45 percent and 55 percent of the vote among ethnic Albanians, who make up 90 percent of the 1.9 million population. While that would be nearly double its result in the election held in 2019, it may still need a partner to govern.

Albin Kurti, the leader of Vetevendosje who served as prime minister for five months last year, won votes on pledges to fight widespread corruption and on a stance that there should be no compromise in a dialogue with Serbia, which lost control over Kosovo in 1999 after NATO bombed its forces.

“A dialogue with Serbia is not one of the first priorities,” Kurti said in a televised address on Friday. “I cannot listen to weeping and screaming in Belgrade about how Serbia lost Kosovo.”

Serbia, backed by Russia, does not recognise Kosovo’s independence, citing the need to protect the rights of its Serb minority. Negotiators from the European Union and U.S. have failed to secure a compromise to allow Kosovo to join international organisations such as the United Nations and NATO.

With one third of its workforce unemployed and a gross domestic product per capita of $4,300 Kosovo remains the poorest country in the Western Balkan region.

“I expect to see a radical change in the health and education sector, those things that we need most and also in justice,” Edin Pula, a 21-year old resident of Pristina, told Reuters.

Vetevendosje may have to join forces with either the now-ruling Democratic League of Kosovo (LDK), opposition Democratic Party of Kosovo (PDK) or Alliance for the Future of Kosovo (AAK).

Disclaimer: Fusion Media would like to remind you that the data contained in this website is not necessarily real-time nor accurate. All CFDs (stocks, indexes, futures) and Forex prices are not provided by exchanges but rather by market makers, and so prices may not be accurate and may differ from the actual market price, meaning prices are indicative and not appropriate for trading purposes. Therefore Fusion Media doesn`t bear any responsibility for any trading losses you might incur as a result of using this data.

Fusion Media or anyone involved with Fusion Media will not accept any liability for loss or damage as a result of reliance on the information including data, quotes, charts and buy/sell signals contained within this website. Please be fully informed regarding the risks and costs associated with trading the financial markets, it is one of the riskiest investment forms possible.

For Trump, an Escape, Not an Exoneration

Litecoin Climbs 13% In a Green Day By Investing.com

Margaux & Max has been able to stay afloat with Dinges’ Facebook livestreams and creative marketing, even while…

Dr. Rochelle Walensky, who has been selected to serve as director of the Centers for Disease Control and…

To profit from planned merger of Tilray and Aphria, buy Aphria, says this analyst

Investors seeking to profit from the merger of Canadian cannabis companies Tilray Inc. and Aphria Inc. are best…

How real Americans are living the ‘Nomadland’ life

For four decades, Jean Hardwick had a good, stable career, health and life insurance and a Sarasota, Fla.…

Expedia Group Inc. on Thursday reported results that reflected the continued effects of the COVID-19 pandemic on the…

2/2 © Reuters. People line up for coronavirus disease (COVID-19) vaccinations on the first day that vaccines were…

A visitor wearing a mask walks outside the Shanghai Disney Resort, that will be closed during the Chinese…

New U.S. data next week to show 7.8% of workforce have multiple jobs By Reuters

The U.S. is still in the middle of a pandemic, with many schools shut and the daily toll…