Lyles unimpressed with his speed after indoor 200m triumph By Reuters 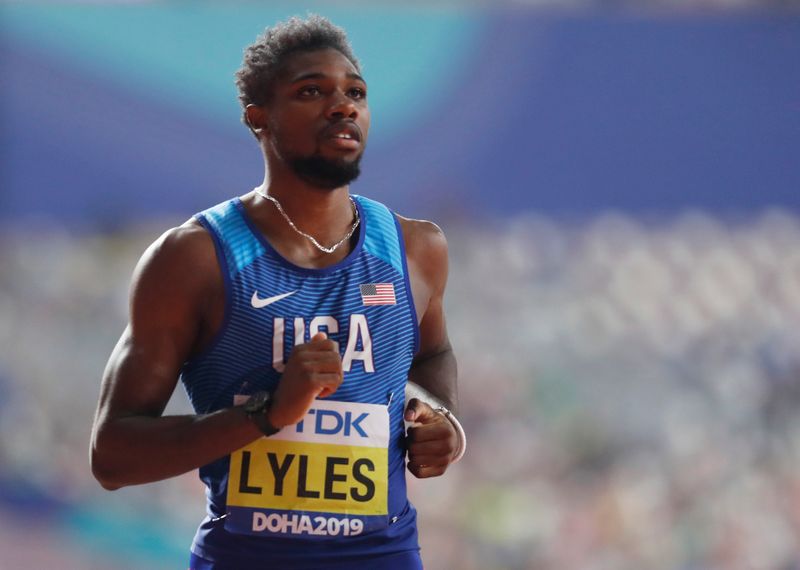 (Reuters) – American Noah Lyles won the indoor 200 metres at the New Balance Grand Prix on Saturday in the New York City borough of Staten Island but the Olympic favourite said he was not content with his performance.

The reigning world outdoor champion, who ran the 60m event earlier in the day, did not pull clear until late in a three-man race that was closer than many had expected but won with a time of 20.80 seconds.

Trinidad’s Deon Lendore was second in 20.92 and American Jaron Flournoy was third in 21.26. American Courtney Lindsey ran the year’s fastest indoor 200m last month in Lubbock, Texas, with a time of 20.45.

Lyles, who is favoured to sweep the Olympic 100m, 200m and 4x100m in Tokyo later this year, looked somewhat baffled after he crossed the finish line and later said he has to work on his speed.

“Me and my coach will go back and see where we need to improve,” said Lyles. “I am really strong right now but my speed isn’t all there.”

“Moving forward, it’s a good thing that I am strong because I can come out here and run two races but in the future we’ll just build up speed on that.”

Disclaimer: Fusion Media would like to remind you that the data contained in this website is not necessarily real-time nor accurate. All CFDs (stocks, indexes, futures) and Forex prices are not provided by exchanges but rather by market makers, and so prices may not be accurate and may differ from the actual market price, meaning prices are indicative and not appropriate for trading purposes. Therefore Fusion Media doesn`t bear any responsibility for any trading losses you might incur as a result of using this data.

Fusion Media or anyone involved with Fusion Media will not accept any liability for loss or damage as a result of reliance on the information including data, quotes, charts and buy/sell signals contained within this website. Please be fully informed regarding the risks and costs associated with trading the financial markets, it is one of the riskiest investment forms possible.

To claim stimulus money on taxes, this letter is key. Why it's needed, what to do if you lost it

The struggling U.K. pubs sector was in the spotlight Monday, as one leading chain said it will issue…

Jordan Spieth holds on to lead at Pebble Beach By Reuters

Despite finishing just 1-under on the day, Jordan Spieth managed to hold on to his lead and even…

To profit from planned merger of Tilray and Aphria, buy Aphria, says this analyst

Investors seeking to profit from the merger of Canadian cannabis companies Tilray Inc. and Aphria Inc. are best…

TipRanks These 2 Penny Stocks Could Rack up Triple-Digit Gains, Say Analysts Is a pause to the stock…

Facebook, Twitter CEOs in talks to testify at House hearing as early as March: Politico By Reuters

Investors have been fixated on growth companies over the past year, and one segment which has been on…

As home prices have soared this past year, home owners have witnessed their wealth skyrocket thanks to rising…